Joining a tight multi-generational family business can be tough as an outsider, especially when the family is globally recognized for producing a hallmark brand, in this case California wines. But Amy Hoopes, a 20-year wine industry veteran has done it seamlessly as President of Wente Family Estates (Livermore, CA), the oldest continuously operated, family-owned winery in the country.  Hoopes joined Wente Family Estates in 2007 and was named president in 2015. Wente Family Estates celebrates five generations working in the business and 136 years in 2019.

She has led many pioneering initiatives for the company and the industry, including #MakeTime, which encourages work-life balance and community volunteerism among Wente’s employees. She discusses how empowering employees to  create a balance between family, self, work and community not only helps build an individual’s personal self-esteem and sense of well-being, but also fosters employee loyalty and productivity. 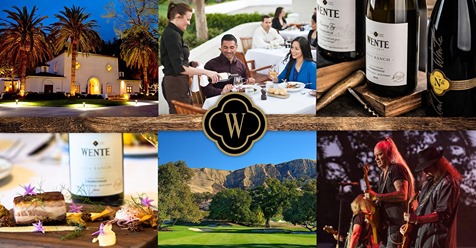 The Wente Clone- the “mother grape”

In 1883 Karl Wente purchased 47 acres of vineyards in Livermore. In 1912, Karl’s son, Ernest persuaded his father to import select Chardonnay cuttings from the best vines in a nursery at the University of Montpellier in France. These cuttings gave birth to what is now referred to in the California wine industry as “the Wente clone.”  (a clone being a viticultural term referring to vines descended from cuttings or buds from an original “mother” vine.)   According to Wente’s website, “over 80% of all California Chardonnay stems from the Wente clone.”

Chardonnay, naturally! Wente Family Estates harvests its Wente clone in four different vineyards in Northern California, each with a different style. We tasted Wente’s Riva Ranch Vineyard Chardonnay 2017, produced from grapes cultivated in its vineyard in Arroyo Seco. The wine has deep tropical notes,  like a light guava jam spread on toast. Great with grilled chicken!

We also tried Niki’s Rosé 2018 made from 100% estate-grown Pinot Noir grapes, also from Arroyo Seco. It’s an aromatic wine with rich raspberry and strawberry notes and touch of mandarin orange. We tend to eat light vegetarian dinners, and this wine, nicely chilled, fit the bill.

The Charles Wetmore Cabernet Sauvignon 2016 is named after one of the Livermore Valley’s most prominent agricultural pioneers, who brought select cuttings from some of Bordeaux’s top chateaux to plant in California. This wine is 79%  Cabernet Sauvignon with smaller percentages of Petite Sirah (9%), Petit Verdot (8%) and Malbec (4%). It’s a velvety wine with dark berry notes and touches of cocoa and black pepper.

Learn more about the Wente story and wine here www.wentevineyards.com 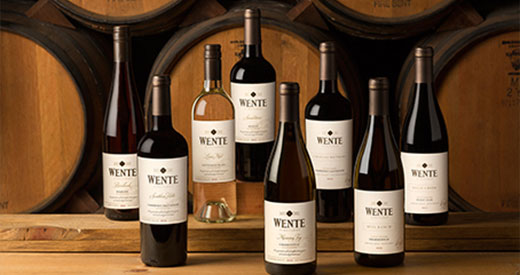 Famille Perrin, owner of Château de Beaucastel in Chateaneuf-du-Pape, has been making wine in the Rhône region of France for centuries.  The family has practiced organic farming since the 1950s and biodynamic farming since the 1970s.  Marc Perrin, fifth generation winemaker, recently sat down with us to taste the latest release of La Vielle Ferme, the family’s top-selling wines from the Luberon in the southern Rhône. We were familiar with La Vielle Ferme’s white, red and rosé still wines, which are all solid quality-for-value wines for everyday enjoyment, but we had not tried tasted the brand’s new sparkling wines. 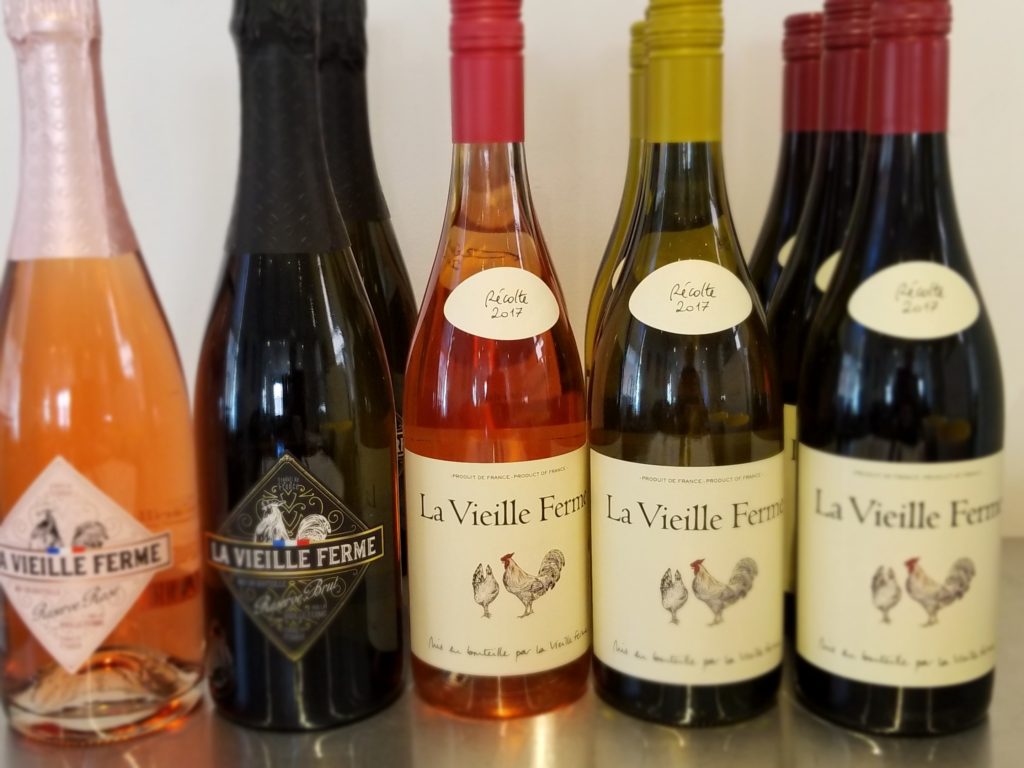 Perrin told us his family spent five years developing a process, which he refers to as “mêthode contemporaine,” to produce their sparkling wines which involved introducing CO2 into the wine just before bottling. The result is a delicate effervescence, which Perrin referred to as a mousse of bubbles. For anyone who prefers a tiny-bubbles frizzante-style wines, this is delightful option at a favorable price of $16.99.

Both wines are made from grapes planted in limestone soil, which enhanced their balanced acidity and minerality. Light and refreshing on the palate, both are perfect wines for a casual meal and had us dreaming of outdoor picnics come summertime.  La Vielle Ferme is imported by Vineyard Brands.  Twitter@vineyard_brands

Jesse Katz had a childhood we dream about- traveling with his photographer- father, Andy Katz, around the world. The senior Katz has photographed beautiful vineyards for a dozen coffee table books, as well as album covers for high-profile musicians like the Doobie Brothers and Dan Fogelberg.

Inspired growing up around great wines, Katz traded a degree in business for one in oenology. He is now winemaker and co-owner with his father at Aperture Cellars in Sonoma’s Alexander Valley. The in-demand wines are Bordeaux-style blends that evoke timeless elegance. Katz produces a critically acclaimed 100 percent Malbec wine at Devil Proof Vineyards, drawing upon his time working with the varietal in Argentina. Its been referred to as a “cult wine.”

Katz’s winemaking pedigree is impressive and includes hands-on experience working at Petrus in Bordeaux, Bodega Noemia and Paul Hobbs’ Viña Cobos in Argentina, and Screaming Eagle, Robert Foley Winery and Lancaster Estate where he orchestrated the building of the new Roth winery, production facility and tasting room. Under his watch, the Roth lined underwent 800 percent growth. Not bad!

Still in his 30s, Katz has 17 harvests under his belt and a few notable accolades, including Wine Enthusiast 40 Under 40, Forbes Magazine 30 under 30 and Wine Spectator Rising Star.  His pals Justin Timberlake and Jessica Biel asked him to create a special wine for their wedding. Imagine what the future will bring.

Both of the two wines we tasted feature Andy Katz’s photography on the label. It’s art on the inside and out of the bottle.

Aperture Cellars Red Blend  2016 (62% Cabernet Sauvignon, 30% Merlot, 11% Malbec and 7% Cabernet Franc) aged 20 months in 50% new oak. An elegant, balanced wine with complex and deep flavors. These days the term “red blend” can refer to some pretty jammy-style red wines. Not here. This wine is solid sophistication and not liquid

We did not have the chance to taste the wine from Devil Proof Vineyard.  It’s limited release and high demand means it you may want to consider joining their wine club and getting on the mailing list.

“Our friend Jesse Katz is one of our favorite winemakers. His new projects prove yet again that he makes the most delicious cult wines in the industry. His wine has been a part of our cellar and enjoyed on countless occasions.”
— Jessica Biel & Justin Timberlake

Central Italy’s Marche region, with its rolling hills that spill into the Adriatic Sea, is an agricultural breadbasket for food and wine. Here, olives, mushrooms, truffles, fresh fruits and vegetables and, of course, grapes to make wine are a few examples of the region’s bounty.

Cupramontana in the center of the Marche is considered the world capital of the white grape varietal, Verdicchio. The word “Verdicchio” is derived from verde, or green, which refers to the yellowish-green skin of the grape. The grape produces crisp, dry wines with naturally high acidity. Aromas consist of delicate citrus fruits and almonds. The Verdicchio varietal is used to make both still and sparkling wines, and the Marche makes some of Italy’s finest.

Cupramontan it also where Colonnara Winery, founded in 1959 by a group of 19 farmers, produces a range of elegant still and sparkling wines.  Export Manager for Colonnara Winery, discusses what makes the Marche unique to growing the Verdicchio grape as well as other varietals  and the winery’s role in region on this edition of The Connected Table SIPS! 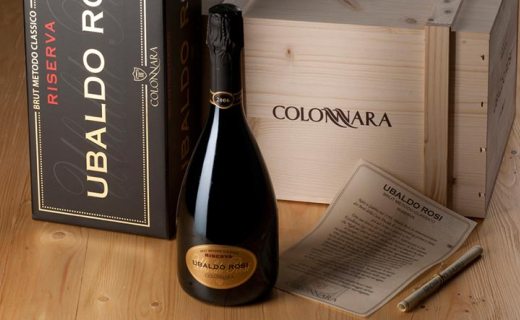 We had the chance to dine with Emiliano Bernardi on November 29, 2016 at a dinner hosted by Theresa Rodgers at Horseneck Wines, a popular wine shop in Greenwich, CT.  Held at elegant L’Escale restaurant, our favorite pairing was the Colonnara 2015 Cuprese Verdicchio with Squid Ink Linguini “De La Mer.” We asked for seconds of both the pasta and the wine!

Nieto Senetiner is one of

Argentina’s great wine producers.  The history of Nieto Senetiner Winery dates back to 1888, when Italian immigrants founded it and grew the first vineyards in Vistalba, Luján de Cuyo, province of Mendoza. Over the first decades of the last century, the winery was run

by several families who succeeded in passing on the secret of fine wine making and the love for their land.

In 1969 it was acquired by the families Nieto and Senetiner, who expand the facilities signalling the beginning of a new stage of growth and brand development. In 1998 it becomes part of the Grupo de Negocios de Molinos Río de la Plata. 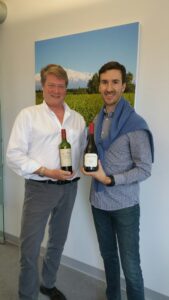 The Connected Table SIPS! visits with winemaker Santiago Mayorga who discusses Argentina’s wine making history, unique climate and terroir, including how vines adapt to high elevation growing conditions. and wine making philosophies. Also discussed are the country’s main wine making regions and some of the most important varietals including Malbec and Bonarda. This show is brought to you by Talk 4 Radio on the Talk 4 Media Network. Listen here 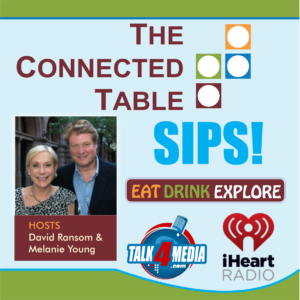 The Connected Table SIPS! podcasts spotlight wine producers and distillers around the world. If you’d like to record a podcast email melanie@www.theconnectedtable.com for information.