Established in 2016, AOC Cairanne is the newest of the Côtes du Rhône’s 17 crus. Located on the left bank of the Rhône River thirty minutes from Avignon, the village of Cairanne is perched on a rocky outcrop, surrounded by vineyards. In the distance one can see the craggy peaks of the Dentelles de Montmirail.

Considered a gateway to the southern Rhône Valley, Cairanne’s climate is Mediterranean- dry and sunny with frequent gusts from the mistral winds which cool and purify the air, an ideal setting to cultivate healthy vines. Many vines in this region are more than 50 years old.

Red wines make up 96 percent of Cairanne’s production. AOC guidelines require that the reds be a minimum of 40 percent Grenache, blended with Syrah, Mourvèdre and Carignan, but no variety can exceed 30 percent of the total blend. The end result are red wines that display sultry spice, fresh red fruits, smooth tannins, and elegant finesse.

Though only four percent of total production, Cairanne whites, also follow stringent AOC guidelines, comprised mainly of Clairette, Grenache Blanc or Roussanne. Bourboulenc, Picpoul. Viognier or Marsanne may be used in smaller amounts. The whites are all aromatic with a bright balance of floral, fruit and spice.

Conservation is important in Cairanne where 26 percent of planted areas are organically farmed, and sulfites are kept to extremely low levels. Most of the vines are gobelet-trained to safeguard against the wind and to preserve the freshness of the fruit. Cairanne is divided into three growing areas. To the west near the Aygues River, vineyards are planted on steep terraces with extremely stony topsoil over calcareous clay. The hilly slopes just north of the village are alluvial clay and silt with limestone. In the flat southern region, the vegetation is shallow scrubland, known in the Rhône Valley as les garrigues. Each contribute to the consistent style and character of Cairanne wines which producers unanimously refer to as more “refreshing and elegant.”

Cairanne is a winemaking community consisting of 50 independent vignerons, 35 négociants and seven cooperatives. Locals talk about a youthful vitality in Cairanne; after all, it is the newest Cru in the Côtes du Rhône. The reference is also a nod to the region’s younger winemakers who are working together with an eye on preservation, sustainability, and recognition for AOC Cairanne in the global wine market.

Here are the producers we met and their U.S. importers:

Domaine Brusset. The Brusset family has been producing bottles wine since 1947 in Cairanne as well as in other appellations in the southern Rhône Valley. (Adrian Chalk Selections/MS Walker)

Domaine Alary. Jean-Etienne Alary is one of Cairanne’s young winemakers whose families have been producing wine in the region for many years. Domaine Alary has existed since 1692. Jean-Etienne represents the 11th generation. (Weygandt-Metzler Importing)

Domaine Les Hautes Cances. This winery was acquired in June 2019 by the Amadieu family, négociants based in Gigondas. They also produce a second label in Cairanne named Pierre Amadieu. (Alain Bradley Imports)

Domaine Boisson. Sixth generation winemaker, Bruno Boisson, studied and worked in Burgundy for several years, which is why the wines have a Burgundian flare to them, notably the barrel-aged white, L’Exigence (Verity Wines)

Domaine Le Grand Bois. An estate founded in 1920 by Albert Farjon now run by his descendent, Mireille Farjon, and her husband, Marc Besnaudeau, who worked as a sommelier in Paris before joining his wife’s family business. (Weygandt-Metzler Importing)

Maison Brotte. The Brotte family are négociants with three estates in the Rhône Valley including Domaine Grosset in Cairanne (Monsieur Touton Selections)

Learn more about AOC Cairanne. Listen to The Connected Table SIPS. Each podcast is 12 minute.

Cairanne, a pretty hill town in the Côtes du Rhone, has a winemaking community committed to producing elegant wines with an eye on sustainability and authenticity. A cru appellation since 2016, AOC Cairanne requires vines to be hand-harvested and sulfite levels kept to a minimum. 26% of all vineyards are organic. Jean-Etienne Alary, 11th generation family member at Domaine Alary, discusses Cairanne’s different soils and how young winemakers are working to support each other. www.vins-rhone.com

One of the Côtes du Rhône’s first cru appellations (established in 1947), AOC Lirac is a wine lover’s gem. The wines were prized among European nobility and the Avignon papacy in the 14th and 15th centuries. In the 18th century, local magistrates in Roquemaure started to authentic the origin of Lirac wines by branding the casks with “C.d.R.” Lirac wines were the first in the region to use the term “Côtes du Rhône.” Today, Lirac wines continue to draw a strong following among sommeliers and other wine aficionados.

Lirac is rare among the 17 Rhône crus for its range of red, white, and smaller amounts of rosé wines. AOC guidelines require all to be blends, mainly using indigenous varieties. Red wines, which comprise 85 percent of Lirac’s production, must contain a minimum of 40 percent Grenache. The remaining amounts are usually Syrah, Carignan, Mourvèdre or Cinsault (the latter is popular for rosés). Around 10 percent of production is white. Clairette is the superstar white variety in Lirac followed by Bourboulenc, Viognier, Marsanne, Roussanne and, to a smaller degree, Picpoul and Ugni Blanc. The white wines lean toward aromatic with balanced acidity. While overshadowed by the reds in the global market, Lirac’s whites are well worth seeking out.

During our visit in early March 2020 (thankfully before the travel shutdown), a robust mistral blew in, practically knocking us over. The locals are used to the mistral wind which average 180 days of the year. Lirac’s climate in the southern Rhône Valley is Mediterranean, but a mistral can have you reaching for scarves and jackets even under a brilliant sunny sky.

These winds, unique to this part of France, combined with more than 220 days of sunshine, play a key role in shaping Lirac’s terroir. They help purify the air to keep humidity low, chase away pests and nurture healthy vines.

Avignon serves as a great base to visit both Lirac and Tavel, its next -door neighbor which only produces rosé wines. If you stay in Avignon, a visit to the Palais du Papes (the Popes’ Palace) is a must, and allow plenty of time (advanced reservations are suggested.). We had the chance to spend a Sunday in Avignon where locals and tourists gather at the covered market for casual Sunday dining or to pick up provisions. It’s great people watching!

We visited with several Lirac producers during our trip. When asked how they would define “Lirac style,” they all underscored “freshness and lush” as a backbone of the wines and what they refer to as “the Rhône Valley’s “right bank style.” In contrast, left bank wines, such as those in Chateauneuf-du-Pape just across the river were described as “concentrated and more intense.” A number of producers in Chateauneuf-du-Pape, have invested in vineyards in Lirac.

Lirac is home to many independent wineries; many are family-run Here are the producers we met and their U.S. importers.

Château de Montfaucon.  The center piece of this estate is a lovingly restored fortress dating to the 12th century owned by a noble family. Proprietor Rodolphe du Pins showed us a pre-phylloxera vineyard dating back 140 years. (Winebow)

Domaine La Lôyane. Started by a family of growers dating back four generations, the winery is run by  Romain Dubois and his wife, Laure.  Organically run, this winery is home to five vineyards including one whose Grenache vines are 150 years-old!  (Elixir Wine Group)

Domaine Lafond Roc-Epine  The Lafond family has been making wine in the Rhône Valley since 1780. “Roc-Epine” was established in 1970 and started to bottle wine in 1978. The name commemorates “Roquepine,” a famous horse race.  (Skurnik Wines)

Château Mont-Redon. The original name, “Mourredon,” dates to 1344, when the property was part of the Pope’s land; it was recognized as a vineyard in the 18th century. Today this winery, is owned by the largest landowner in Chateauneuf-du-Pape who saw the potential in making wine in Lirac.  (F. Wildman)

La Maison Ogier. In 800 A.D. with “Ogier the Dane” fought with Charlemagne’s soldiers and settled in the area. The family entered the wine business in 1859.  Ogier was founded in 1948. Today it is a leading negociant in the Rhône Valley. (Folio Fine Wine Partners)

AOC Lirac on the Rhône River’s right bank is a small cru appellation producing lush reds and aromatic whites. Lirac has an ideal terroir: over 200 days of sun, purifying mistral winds and three different soils: rocky galets, calcareous and sandy, with most vineyards organically farmed. AOC Lirac Co-President Rodolphe de Pins is owner of Château de Montfaucon, where some vineyards date back 140 years. He discusses how Lirac’s different soils shape the character of its wines. www.vins-rhone.com

One of the Côtes du Rhône’s first cru appellations since 1947, AOC Lirac is a wine lover’s rare gem, just northwest of Avignon. Lirac wines were prized among Europe’s nobility and the Avignon papacy in the 14th century. Lirac is rare among the 17 Rhône crus for its range of red, white and smaller amounts of rosé wines made from blends of mainly indigenous varieties. Château de Montfaucon’s Rodolphe de Pins, AOC Lirac Co-President, discusses the region and styles of wine. www.vins-rhone.com 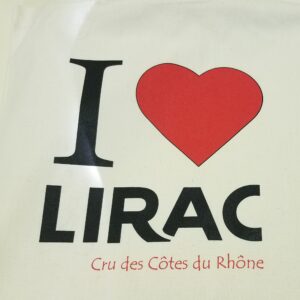