President Obama Called Him the “Master of the Crust”

Melanie says she grew up in The Crust Belt. It’s the section of the South she fondly refers as “the land of fries and pies where everything is better

with batter and butter.” That’s why we’re excited to have Bill Yosses on the show August 10th. As Executive Pastry Chef at the White House for both the Bush #2 and Obama administrations, Bill had his hand in everything from quiet First Family dinners to more elaborate State Dinners, and exhibits such as the Gingerbread White House.

Bill will share some of his White House memories and talk about his new ventures: the non profit Kitchen Garden Laboratory, which teaches food literacy to children in under-served communities. Kitchen Garden Laboratory uses the triad of food and cooking (Kitchen), planting and growing (Garden) and scientific experimentation (Laboratory) in its education programs to promote delicious, nutritious eating for better health outcomes, as well as foster food and STEM (science, technology, engineering and mathematics) literacy. 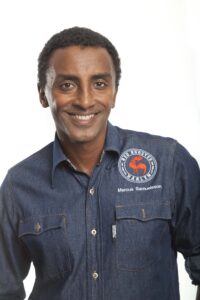 He grew up as a Navy brat, dropped out of high school to join a punk rock band and has been to all fifty states.  Graham Elliot  fell into cooking while working menial jobs in restaurants to support his musician’s life on the road. Inspired, he enrolled in Johnson & Wales to receive his formal training and considers Rick Tramonto, Dean Fearing and the late Charlie Trotter among his mentors.

Graham first made a name for himself at Avenues restaurant at The Peninsula Hotel in Chicago where at age 27 he was the youngest chef to earn four-star ratings from the Chicago Tribune, Chicago Sun-Times and Chicago magazine, as well as a AAA Five Diamond Award. Along the way, Graham also was named one of Food & Wine’s Best New Chefs (2004), Crain’s (Chicago) 40 under 40, and received two Michelin Stars for his restaurant – one of only fifteen U.S. restaurants to receive that honor.

He’s owner of Graham Elliot Bistro, opened in 2008, a popular dining destination for Chicagoans and foodies from all over the world, a testament to Elliot’s inventive cuisine and engaging personality.

The dedicated father to three sons, Mylo, Conrad and Jedediah, Graham splits his time between his home base Chicago and his TV home in Los Angeles where he co-hosts alongside Gordon Ramsey on Fox Network’s wildly popular MasterChef and MasterChef Junior series.

So where did he find time to write his first cookbook? Cooking Like A Master Chef – 100 Recipes To Make The Everyday Extraordinary  is just released, Designed to make any home cook a star in the kitchen, it’s based on Graham’s belief that A) food is best when it “tastes like itself” B) eat with seasons when possible C)  there is no right or wrong when it comes to creativity in the kitchen.

Waiter! There’s a fly in my wine!

This is just one of the serendipitous stories in Joanne Weir ‘s new memoir, “Kitchen Gypsy: Recipes and Stories from a Lifelong Romance with Food.” 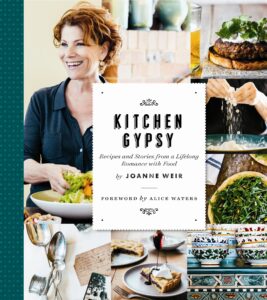 I particularly loved this story because Joanne ends up in her tender 20s as a guest at a famous Bordeaux Chateau as a result of mailing the dead fly to the producer. That’s gumption!

I’ve known Joanne for years. We connected annually at The James Beard Awards where her PBS TV series such as “Weir Cooking in the Wine Country” and “Joanne Weir’s Cooking School” were honored.  I enjoy visiting her Mexican restaurant Copita in Sausalito, just a short walk from where dear friends, Valerie and David live.  Joanne’s the original “Agave Girl” and serves a fabulous selections of tequilas at Copita and a mighty fine margarita. 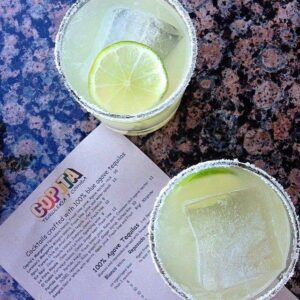 Joanne’s a fourth generation professional chef who grew up on a farm in Massachusetts. Originally destined for a career in fine arts, she refocused on the art of the table. Joanne trained under the notoriously tough teacher Madeleine Kamman to receive her Master Chef Diploma. She spent five years cooking with Alice Waters at Chez Panisse (Alice wrote the forward to Kitchen Gypsy.)

But Joanne’s first love is teaching, and she does it around the world. She’s a true global culinary ambassador, in this case being one of 80 chefs  appointed by Hilary Clinton and the State Department in 2012 to promote world relations through food. We’ve always known better decisions are made on a happy and full stomach than an empty one, no matter side of the political table you sit on. – Melanie Young

Joanne joins is at The Connected Table LIVE!  September 30 on www.W4CY.com (iHeart.com). Link to all show episodes is: http://www.iheart.com/show/209-The-Connected-Table-Live