The Beaujolais region in France has been designated a “Paie d’art et d’histoire,” recognizing its centuries-old heritage, picturesque villages, historic sights and many wine estates. Nearly 200 wineries are open to the public.

The official Beaujolais Wine Route covers roughly 85 miles. To the south are the larger regions of Beaujolais and Beaujolais-Villages. Moving north you’ll find the 10 smaller crus. Like the wines themselves, each appellation has a unique character based on its climate, altitude and diversity of soils which include an indigenous pink granite, clay, schist and limestone.

Here’s a snapshot, of the Beaujolais Wine Route:

Comprised of 72 villages, AOC Beaujolais, the southernmost appellation, is three times larger than neighboring Beaujolais-Villages, to the east. While reds made from the Gamay grape dominate, one can experience vibrant rosés and white wines made with Chardonnay. Whites from the Beaujolais appellation can carry hints of peach and apricots ,while Beaujolais Villages whites can have aromas of pear, fresh almond and tropical fruit and a touch of almond and vanilla.

Here are some fun facts about these two areas: In AOC Beaujolais, Les Pierres Dorées, which translates to “golden stones,” refers to a cluster of picturesque villages dotted with large golden stones that can be quite spectacular in the sunlight. In fact, this area has earned the nickname “Little Tuscany,” thanks to its steep hills and gorgeous landscape. One example is the hilltop town of Oingt ( oh-engt), which is named one of the most beautiful villages in France.

For a nice introduction to the region, visit the historical capital of Beaujeu (BO-JU), located in Beaujolais-Villages. The Beaujolais Museum has information on the region’s viticultural history.

Venturing northward lie the 10 Beaujolais crus. Cru wine styles change thanks to geology and climate. One can try Beaujolais wines that are softer like Brouilly, Fleurie and Chenas to more supple and structured like Julienas, Morgon and Moulin A Vent.

Brouilly and Côte-de-Brouilly are the southernmost crus. Brouilly wines are more fruity- plummy with some minerality. Côte de Brouilly wines are slightly fuller bodied. This is due to soils and elevation. This area has a mixture of four soil types: pink granite (unique to Beaujolais), limestone marl, river rocks and clay.

Mount Brouilly straddles the two AOCs -Brouilly at the base and Côte-de-Brouilly on the mountain slopes where vineyards grow in rocky, volcanic soils, some dating to Roman time. At the summit of Mt Brouilly is Notre- Dame- aux Rayzin (The Chapel of Our Lady of the Grapes). It was built in 1857 to protect the vineyards.

Venturing north, Régnié is a small cru spread over just one square mile with pink granite, mineral-rich terrain. Grapes are grown on hillside around 1,150 feet above sea level. Régnié produces aromatic wines with notes of raspberry, red currant, blackberry and a touch of spice.

Morgon is the second largest Cru after Brouilly with 250 producers in 4.5 square miles. It is named after the local hamlet of Morgon. The soil in Morgon is rich in iron oxide with traces of manganese and volcanic rock. Morgon wines are fuller-bodied with a deep garnet color and favors of ripe cherry, peach, apricot and plum.

Chiroubles has been called “the most Beaujolais of all the crus.” This region has a higher altitude, 1,475 above sea level and cooler temperatures Wines are ruby red with light floral votes of violet and peony.

Fleurie, a northern cru, covers just three-square miles. The soil here is almost entirely made up of the pinkish granite unique to this part of Beaujolais. Fleurie produces softer, aromatic wines with floral and fruity essences of iris, violet, rose, red fruit and peach.

The highest rated of all the Beaujolais crus, Moulin-à-Vent is ruby to dark garnet in color with lush floral and fruit aromas. It’s a wine that evolves and becomes more complex with age, delivering more earthiness and spice. Moulin a Vent means windmill, a nod to the giant windmill located in the town of Romaneche-Thorins

Chenas in a small cru located in a mountainous area that was once a dense forest before King Phillippe V ordered the trees be repaved with vines. Chenas is considered one of the finest crus, whose garnet-ruby red wines can be aged for a few years. Chenas wines were a favorite of King Louis XIII.

Moving northwest in Beaujolais, Juliénas produces earthier wines with a deep ruby red color and strawberry, violet, red currant and peony characteristics. Juliénas are powerful wines with essences of vanilla and cinnamon laced into the red fruits. The name, Julienas is taken from Julius Caesar; many vines here date to the Gallo-Roman period.

Beaujolais’s northernmost cru is called Saint-Amour. Wines can range from soft, fruit and floral to spicier, with notes of cherry kirsch. Saint-Amour is known as the most romantic Beaujolais. In fact, 20 to 25 percent of Saint-Amour sales occur in February around Valentine’s Day.

Now that we took you on a snapshot tour, we hope you are ready to taste. For more information on Beaujolais and its wines visit www.beaujolais.com

Listen to our SIPS podcast on The Beaujolais Wine Route below (stream), or click here: https://bit.ly/TCT_BeaujolaisAppellations

There are some many fine Beaujolais wines from the ten cru regions From north to south, each has its own subtle style: St-Amour, Juliénas, Chénas, Moulin-a-Vent, Fleurie, Chiroubles, Morgon, Régnié, Brouilly, and Côte de Brouilly. Many call them the gems of the appellation. So, we always wondered why the intense push to celebrate the release of the Nouveau received all bling. Well, they have their place at the table at different occasions.

For a “personality analysis” of each Beaujolais Cru check out this article from VinePair which also includes this helpful map:

Cyril Chirouze oversees winemaking at historic Château Des Jacques, located in the villages of Romaneche-Thorins in the Moulin-a-Vent appellation.  The winery, now under the management of Maison Louis Jadot, focuses on traditional Burgundian methods of wine making: longer maceration, wild yeast fermentation, and aging in oak barrels for ten months to add complexity.

Recently we dined with Cyril in New York at DB Bistro Moderne and tasted a preview of a few Château des Jacques‘ 2015 releases. The wines were elegant, and Cyril was eloquent on the subject. He joins us May 31. 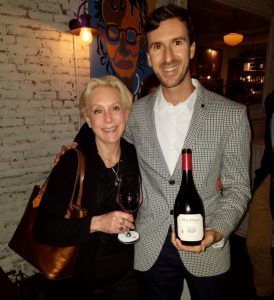 We’re hosting our third Thanksgiving at Camp David here in the Hudson Valley. Last week Nathalie Dupree shared her time-tested tips for entertaining a group. 1. Take control and have specific seating times and limited “drinks time” 2. Stay organized with a flow chart 3. Two smaller roasted -not brined- turkeys in the oven are better than big one. 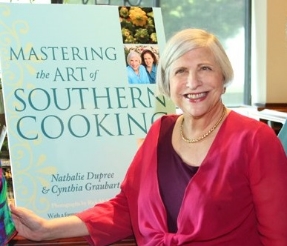 Here’s the link to last week’s show  with Nathalie  which also featured Hervé Deschamps Chef de Cave and Cellarmaster for Champagne Perrier-Jouët who is only one of seven to hold this position in the company’s 200+ year old history.

Melanie attended Citymeals-on-Wheels 29th Annual Power Lunch for Women at The Plaza Hotel November 20th attended by more than 350 women including many in our industry. This year’s lunch raised $1.2 million to help feed NYC’s home bound elderly. 100% of contributions go toward meals. Congratulations to Citymeals’ Fearless, Fabulous Founder Gael Greene. Here’s a link to our Connected Table show with Gael. To support Citymeals and make sure NYC’s most frail residents receive the nourishment they need, please visit www.citymeals.org.

This week’s show visits Beaujolais which celebrated the annual arrival of Nouveau November 19 at one minute past midnight. Due to a schedule change last week we are spotlighting the region this Wednesday. Joining us is Caroline Von Klitzing (née de Roussy de Sales), owner of Château de la Chaize in Brouilly, one of the oldest and most historic estates in Beaujolais.

Our longtime friend in the wine world, Josh Wesson takes a break from helping out during the last minute Thanksgiving rush at his Upper West Side store, Best Bottles to share some of the latest projects he’s working on. Josh always has an anecdote or two up his sleeve.

THE CONNECTED TABLE LIVE airs Wednesday, 2pm EST on W4CY.com. Shows are available to listen and download anytime on iHeart.com and iHeart App.  Find The Connected Table LIVE under Shows and Personalities. Episodes are filed by the names of our guests, and we encourage you to re-post and share. Here is a cut and paste link:
http://www.iheart.com/show/209-The-Connected-Table-Live/

Please let us hear from you.

ABOUT IHEART RADIO: With 245 million monthly listeners in the U.S. and 97 million monthly digital unique visitors, iHeartMedia has the largest reach of any radio or television outlet in America. Join our family as a sponsor of our show.